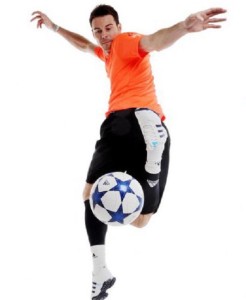 Billy is one of the most experienced football freestylers in the world. Starting professionally in 2003, Billy has experienced almost every avenue within freestyle including live performances at the World Cup in front of 300,000 people, being the first freestyler to be signed to a professional Football Club (Tottenham Hotspur FC), holding 3 Guinness world records within Football Freestyle, being the first freestyler to have a tutorial DVD, choreographing adverts with the likes of Messi, Ronaldo, Torres, Del Piero & the whole Manchester United squad. Billy has brought awareness to football freestyle throughout the world gaining over 40 million hits on you tube. In this perfect partnership with Jeremy Lynch, Billy will bring his wealth of experience, professionalism and knowledge to The F2 team.

Jeremy is widely regarded as one of the best football freestylers that has ever been. After being inspired by watching a Nike commercial in 2000 with Edgar Davids and Denilson, Jeremy started doing tricks and it has taken him around the world. He was one of the stars in the biggest UK documentary of all time “In the Hands of the gods”. He won the hearts of the nation when he was a finalist on Britains Got Talent 2008. He has become a YouTube phenomenon with his videos racking up over 20 million hits. He has filmed videos with the likes of Christiano Ronaldo, Robinho and Nani, and worked with some of the worlds best players including Cesc Fabregas, Ronaldinho, Robin Van Persie, Drogba, Samir Nasri, Theo Walcott and Wayne Rooney to name a few! Jeremy will bring his charismatic charm and entertaining genius to The F2.