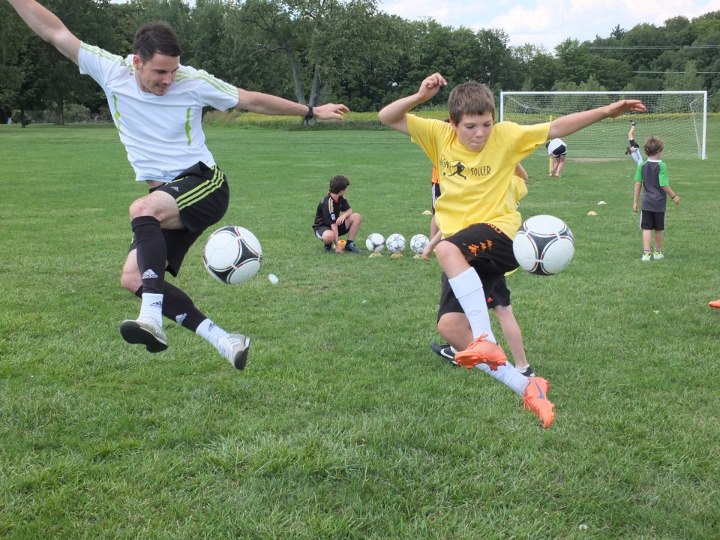 Paul Thornton talks about the dilemma his family faces with the development of his superstar soccer player son Michael.

Tough choices: His family plans to move to Europe for him to join a pro club, part of the difficult decisions the parents of elite athletes have to make.

The Toronto youngster, who turns 13 later this month, is so gifted with the ball at his feet he’s already attracted attention from some of the world’s most renowned clubs — Manchester City, AS Roma, Inter Milan, Sampdoria and Paris Saint-Germain — where he has been on youth academy trials.

In May, Michael, his parents, Paul and Debbie Thornton, along with his two brothers, David, 10, and Chris, 14, are off to Spain to kick more soccer balls — and tires — in search of the right European club to nurture him.

By late summer, it’s hoped Michael will sign with one. If he does, the entire family of five will be uprooted — the boys attending new schools in, most likely, foreign-speaking lands, the parents turning over the day-to-day operations of their business to someone else — so he can chase his dream.

“We want to be able to give Michael the opportunity to go and test himself amongst the most passionate, most skilled players,” said Paul Thornton, 50. “We have the luxury of a very rare opportunity to take a chance at it.

“And we never want to say down the road, or have him say, ‘I think I could have had a shot at it but you guys didn’t want to jump in.’ ”

Such a notion may seem foolhardy and irresponsible to many people. But for the parents of young athletes who are immensely talented, the gift comes with an obligation. If the young man or woman is so good at a sport and so dedicated to pursuing it professionally, there’s no choice but to let them.

The odds are extremely long and the costs — both financial and emotional — can be staggering. But that doesn’t prevent a parade of young phenoms each year from leaving home — and disrupting the lives of the other members of their family in the process — in the belief they can be a chosen one.

There are successes for them to point to. Arguably the most famous is Lionel Messi, 25, regarded as the world’s best footballer. At age 11, the Argentine moved to Spain with his father and joined the youth academy of FC Barcelona after the club agreed to pay the cost of his treatment through adolescence of a growth-hormone deficiency too expensive for the family.

Closer to home, top GTA basketballers enrol in U.S. high schools hoping it’s a ticket to a scholarship at a top NCAA school. Young hockey players move across the province, or country, chasing the NHL dream via junior-A. No matter the sport, the quest for the big time trumps all.

Psychology professor Gary Walters said while not unique to the world of sports, exceptionally talented kids in athletics tend to stand out from their peers more than in other pursuits, such as the arts. And, they get more attention because the payoff, both financially and in fame, can be so large.

“With talent that is so rare it almost seems from a parent’s point of view that you just can’t deny the kid a chance,” said Walters, who is at the University of Toronto and studies parenting. “The question isn’t so much is this a good thing to do, it’s really much more if you don’t do it will that be a bad thing.”

Bill Aird knows that first-hand. His son, Fraser, was a 16-year-old Grade 10 student at Scarborough’s Albert Campbell Collegiate Institute when he left to join the youth side of Rangers FC in Glasgow, Scotland.

“This is something he always wanted to do,” Bill Aird, 61, said of his youngest son who started playing minor soccer at age 3 on the team of his big brother, Cameron, where the kids were two years older.

Fraser, who had previously had trials with Rangers, their Glasgow rivals Celtic FC, and England’s Burnley FC before signing a professional contract and moving to Scotland two years ago last month, was clear with his parents.

Bill Aird recalls Fraser sitting them down and saying if he didn’t go he would wonder “for the rest of my life” could he have done it. And, if he went and failed, “at least I’ll have tried,” his father recounts.

“When your kid puts up that kind of discussion and argument, it’s very difficult to hold him back,” Bill Aird said. “We felt you have to encourage your kids at whatever they want to do and support them 100 per cent.”

Two years on, Fraser Aird has become a regular starter with Rangers first team, which has a big lead atop the Scottish third division. He signed a new five-year contract with the club last month, just after his 18th birthday.

The path to success is rarely so direct. A young athlete who is superb amongst their peers in their city, or even their province, may not have the skills to match other local heroes in a larger talent pool. Of course, even if their ability is enough, there’s the mental side of things to consider as well.

Toronto golfer Rebecca Lee-Bentham admits to being overwhelmed in 2012. In her first LPGA Tour season after giving up on a full scholarship at the University of Texas to play full time, she made the cut in just four of 14 tournaments, winning $16,449 (U.S.) and finishing 134th on the money list.

But Lee-Bentham, who turns 21 next week, never regretted the move, saying the rookie struggles made her “more humble and want to work harder.

“The reason why I left school was not because I thought I was ready and I was going to succeed right away,” Lee-Bentham said from Phoenix, Ariz., where she’s playing this week’s $1.5 million (U.S.) R.R. Donnelley LPGA Founders Cup. “The reason was because I needed the time to get better.”

Her second year is starting with more promise. After finishing tied for first in December’s LPGA Tour qualifying school, Lee-Bentham opened the season with her best career finish, T-18, at an event in Australia.

Her father and caddy, Ken Lee-Bentham, 57, said despite a tough 2012, he continued to believe “she made the right decision” in leaving school, a decision that was supported by the entire family.”

Paul Thornton admits he’s “frightened” of moving his family to Europe for up to two years and “I don’t even want to think of the odds” Michael becomes a star. And, while youngest son, David, is excited for the adventure as long as he goes to an English school, the older one, Chris, is less so.

Still, as operators of a property management business they can will oversee from overseas, Paul Thornton believes everyone’s “life experiences” will be enriched by being exposed to a different country, language and culture.

“If it doesn’t work out, ultimately you can just come back,” he said. “But if you don’t try, then you’d never know. So, we’re going to take a chance.”