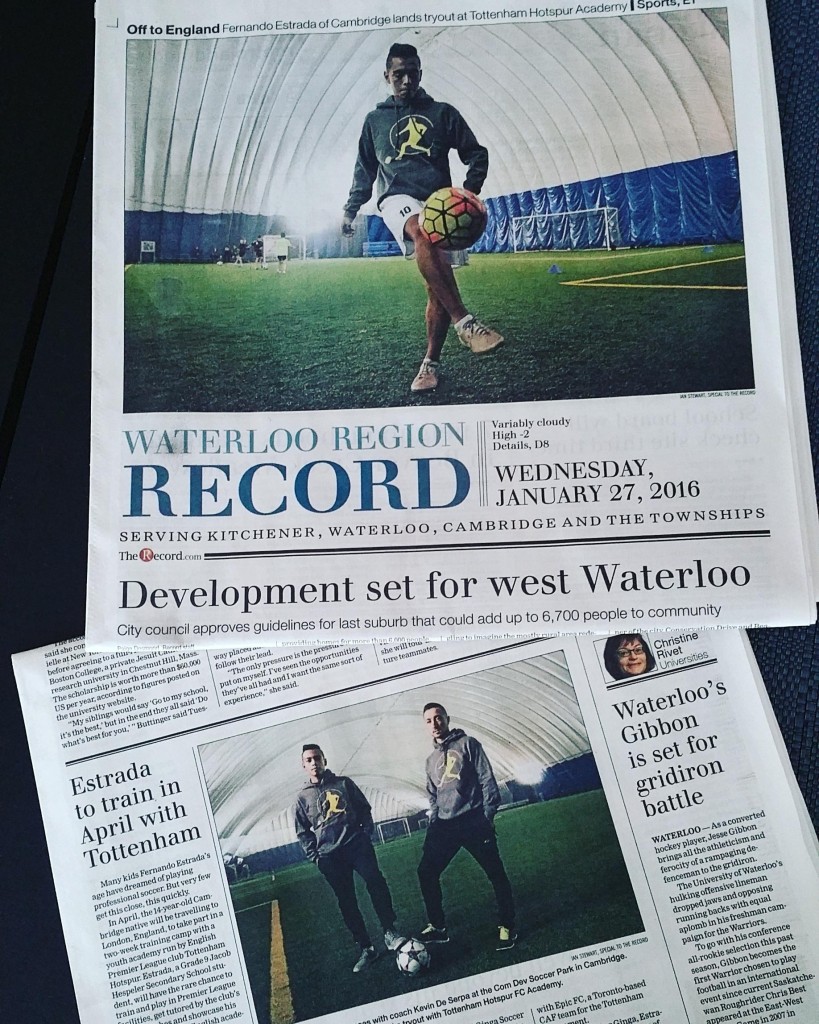 Many kids Fernando Estrada’s age have dreamed of playing professional soccer. But very few get this close, this quickly.

In April, the 14-year-old Cambridge native will be travelling to London, England, to take part in a two-week training camp with a youth academy run by English Premier League club Tottenham Hotspur. Estrada, a Grade 9 Jacob Hespeler Secondary School student, will have the rare chance to train and play in Premier League facilities, get tutored by the club’s youth coaches and showcase his talents against top English academy teams.

But above all, he has an opportunity to earn a scholarship to join Tottenham’s academy full-time.

“I didn’t believe it at first, I was just shocked” said Estrada, recalling the day a few weeks ago when he came home from school and his parents told him Tottenham had invited him to the training camp.

“But now, it’s nothing but excitement. I want that spot (in the academy) and I’m only thinking of working hard and playing my best so I can stay.”

Estrada caught the eyes of Tottenham’s scouts in December at the Tottenham Hotspur America Cup in Baltimore. The annual tournament features elite youth teams from the U.S., Canada and the U.S. Virgin Islands playing in front of the club’s global scouts, with standout players getting invited to April’s training camp.

After a strong performance in the Tottenham tournament, the scouts got a second look at Estrada at another December tournament in Florida and shortly after Christmas they invited him to the April camp.

“There was no question in my mind he was going to do well,” said Kevin de Serpa, head trainer and owner of Kitchener-based Ginga Soccer Academy, where Estrada has played for the past three years. “I told him before he went, ‘you have nothing to worry about, you do your thing and you’ll get noticed.'”

De Serpa started Ginga Soccer five years ago to provide opportunities for local youth payers looking to play professionally, earn scholarships or make national programs. The Kitchener native had multiple stints with Canada’s national team and played 12 years of professional soccer — including two years in Brazil, which is where he got the name “Ginga,” a Brazilian dance often used to describe the way the best players move.

The academy hosts training programs throughout the year and enters teams in the Canadian Academy of Futbol (CAF) league, joining other academy teams based around the Greater Toronto Area.

Because Ginga doesn’t have an under-15 team, Estrada played with Epic FC, a Toronto-based CAF team for the Tottenham tournament.

Prior to joining Ginga, Estrada had only played two years of rep soccer with Cambridge United, starting at the under-nine level. To that point his soccer experience was mostly playing pickup games with his three brothers and watching now-retired greats like Brazilians Ronaldo and Ronaldinho on TV with his parents Rachel and Mario — who played professional soccer himself in his native El Salvador.

“He’s such a natural talent, but when I give him information, he doesn’t waste it,” said de Serpa. “He takes it and gets it right away. I say to him ‘you’re going to make it,’ not just because of his skills on the field, but mentally as well.”

Through his connections from his playing days, de Serpa brings former pros to Ginga as guest trainers and sets up international trips for his players. Two years ago, Estrada and 13 other players spent 10 days training at an academy run by Spanish star Cesc Fabregas, after which Estrada spent two weeks with Barcelona club C.F. Damm’s academy.

“That helped me a lot because those players are born in that atmosphere of soccer and soccer only,” said Estrada. “I got to see how much more I needed to prove myself.”

Never shy with his praise, de Serpa gushes about Estrada’s exceptional vision and ball handling on the pitch, and his leadership ability and mental toughness off it. Estrada says that praise is special coming from de Serpa, because, “He’s already done it. To hear him say that I can make it, I can do it, it means a lot.”

De Serpa played his professional soccer in Norway, Portugal, Scotland, Spain and Brazil and hopes to use his experience to help Estrada and the many other players he believes can follow in his footsteps.

“When I was 15, I went to Benfica, Portugal myself and there was no one to guide me and tell me what to watch out for,” said de Serpa. “I want to give them my experience and as much guidance as I can.”

One thing de Serpa has never sugar-coated is the amount of work and commitment it takes to make it at the next level. But that’s never fazed Estrada.

“I love the hard work,” Estrada said. “It shows the true the desire for the sport, the passion for the sport and how far you can go.”

As Estrada counts down the days until April’s training camp, he’ll continue training at indoor sessions with Ginga. While this type of opportunity could overwhelm some teenagers, de Serpa isn’t worried about his young pupil.

“He’s well beyond his years,” said de Serpa. “He’s a very humble kid. He’s the type of player who picks up his teammates and pushes them to do more.

“I think he’s going to set the standard for players from this area.”