​The Origins of GINGA – A Well Travelled Word –

Gingas roots are in the Kikongo language, one of the languages spoken in part of Angola today and in part of the Congo Kingdom, where the Portuguese arrived in the early fifteenth century. Via the Trans-Atlantic Slave Trade, millions of Africans were brought into Brazil to work the tobacco and sugar plantations. 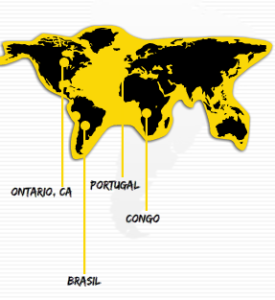 Through the cultural contact Ginga came into the Portuguese language in many aspects: first, as a metonymic effect of Nzinga, a Mbundo Queen –the first woman to lead the Mbundo Kingdom– who fought and endured strong opposition from healers, farmers, Portuguese and Imbangala warriors– a secret male society that initiated youths inside the Kingdom to war and were called Jaga or Yaka by the Portuguese. Second, as a reference to Ngingas warriors, also called ginga by the Portuguese according to Joseph Miller, an African historian. Third, as Jinga, a Mbundo word whose semantic universe is centered around the idea of constant movement, and articulation.

In Brazilian Portuguese, ginga is a slang word that means to shake THE BODY, TO SHAKE WITH SKILL. Ginga performs as a search for a balanced form of life represented by flow and rhythm through motion ideas. Ginga is Ronaldos fluidity of motion as he slides past three defenders and the goal keeper before tapping the ball into the net. Ginga is the rhythmic sway of Michael Jordan swinging the ball effortlessly back and forth between his legs before lifting into the air giving the actual appearance of wingless flight. In other words, Ginga is the perception that catches the rhythm of life.

Ginga has manifested as the life force/energy of the Afro-Brazilian people and is shared by the Afro-American as well as the American Natives whose culture also reflects many of the fundamental aspects of Ginga. A fellow from Rio de Janeiro named Jefferson said,
“Ginga for me is my way of walking, speaking and dressing. This is the black Brazilian ginga. Ginga is a slow way of speaking, a sort of dancing, a way of walking and wearing light clothes.”

Music plays a very big role in the essence of Ginga. Everything is rhythm. There’s a rhythm in the sea, a rhythm in the sounds of nature, in the wind blowing through the trees, in anything that you can think of – rhythm is always in-between, on the border of everything, scattered, fractal and universal all at once.

Tuning into this rhythm elevates us to a place where we can move our physical being into complete harmony with our spiritual self and thus achieve a level of excellence that is manifest in any undertaking. This is why the Brazilian footballers are the best in the world today. They use the power of Ginga to play with a style, and fluency of motion that sets them apart from others who are unknown to Ginga.

Ginga is one of Gods original gifts to humanity. It is for all of us who are willing to tune in and receive it.